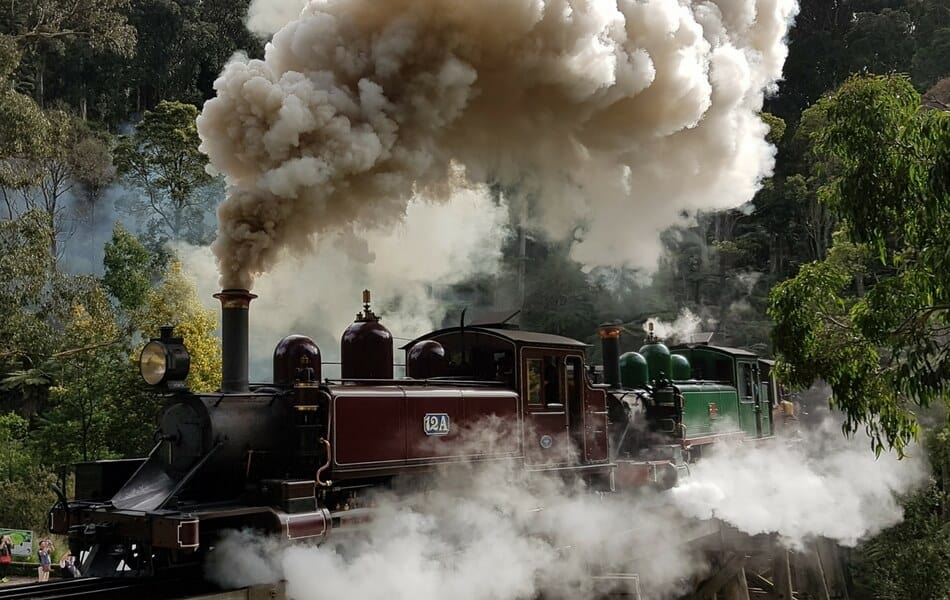 Puffing Billy is the darling of the Dandenongs and a World Famous Steam Train ride through stunning Australian forest scenery. Leaving the Belgrave Station on a regular schedule, passengers of all ages can dangle their legs from the carriages and wave madly at the people who stand by the track along the way to watch.

(Sadly, there was an incident that, though not too serious, it has meant that sitting with your legs out of the train is no longer allowed).

The Puffing Billy Preservation Society brought life back into what had been a commercial venture to transport goods and passengers down from Gembrook in the Dandenongs, the line was opened in 1900 between UpperFerntree Gully and Gembrook. A landslide in 1953 that saw the closure of the line after years of financial instability.

In 1962 the Preservation Society officially opened the line from Belgrave to Menzies Creek, but this time as a tourist attraction.  An extension to Emerald opened in 1965, to the Lakeside Station in 1975 and finally all the way to Gembrook in 1998.

An incredibly dedicated team of around 900 volunteers and dozens of staff keep Puffing Billy and all the other trains operational. 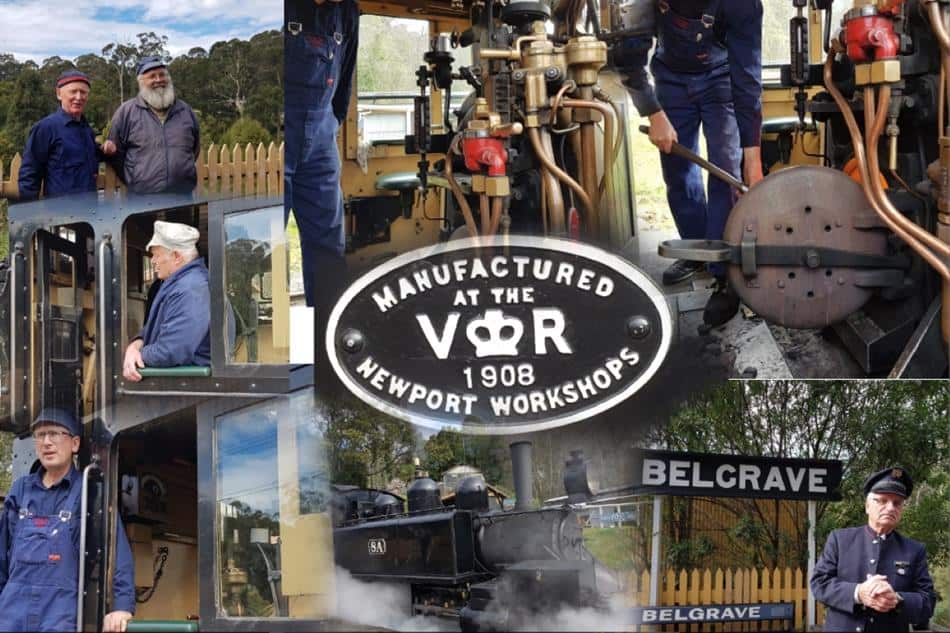 Only the wealthy and elite members of society could afford the luxury of first-class dining back in the 1900s but now it is available to all, eating in the heritage dining carriage is wonderful. We recently enjoyed a wonderful meal aboard Puffing Billy and recommend the experience to anyone wishing to indulge a little and at the same time experience some of the most beautiful countrysides in Australia.

Climax 1694 is the only wood-fired locomotive running on the Puffing Billy Line and the only one operating in Australia. Built in 1928 by the Climax Manufacturing Company in Pennsylvania, this wonderful little train hauled timber for 21 years in Gippsland before the line was closed in 1949.

Abandoned for years near Erica, Climax 1694 was bought by the Puffing Billy Preservation Society. Initially intended as a stationary display train, it was restored to working order in 1988.

The commissioners’ Train only runs a few times a year and passengers are shown the workshop where the trains are maintained – engines are completely overhauled. It stops in Menzies Creek where the new Puffing Billy Museum is being built, before rambling off to Emerald, Lakeside, and Gembrook. Bookings must be made online.

Puffing Billy Museum in Menzies Creek, due to be opened in 2018

The volunteers and staff who maintain the trains, organize excursions and the timetables are all a wonderful group of characters who make it such a special experience to ride on the trains. The friendly camaraderie between them is wonderful to watch.

Find more information and a map of the train line here.

Tour bus companies operate day tours to Puffing Billy and then over to the Yarra Valley or the Little Penguins on Phillip Island. For anyone wanting to combine these destinations, a tour may be ideal.

However, doing a self-guided trip to the Dandenongs is so easy and a whole day can easily be spent up here. Ride the steam train and explore Emerald Park Lake or do the return trip to Belgrave and then take a hike in the forest.

There is a superb walk from Belgrave to Sassafras, 12 km or so, but really pretty. Or do the walk just as far as the well-known Grants Picnic Ground – enjoy a cuppa, see the birds and either walk back to Belgrave or take a bus back down the hill.

PS… did you know you can actually see Little Penguins at the end of St Kilda Pier? No flash photography, no dogs and keep off the rocks where they nest. Walk at dusk along the pier and go through the gates. There is often a local guide to provide more information about the penguin colony. Drop a few coins into the donations box as this provides towards any costs to keep the penguins healthy and safe.